Theoretical Background of the “Resonalyser Procedure”

The “resonalyser procedure” is a mixed numerical-experimental method for identifying the Engineering Constants of thin 2D material sheets having elastic isotropic or orthotropic elastic properties. Material sheets include rectangular test beams and rectangular test plates with constant thickness over the entire sheet. The material elastic properties are assumed to be uniform in all points of the sheets. For orthotropic materials, the material symmetry axes are assumed to be parallel (or perpendicular) with the sheet boundaries.

For a beam (a one dimensional sheet), the dominating Engineering constants are the Young’s modulus E in the longitudinal direction and Poisson’s ratio ν.

Standard testing for measuring the Engineering Constants of beams is often performed by a tensile test on a test beam equipped with strain gages (or a similar deformation sensor).

It is assumed that all material points of the beam material during a tensile test have a uniform stress σ and a uniform strain ε. The relationship between the stress σ and the strain ε is given by the formulas below. F is the tensile force, A is the cross section area, E is the Young’s modulus and ΔL is the extra deformation of the original sensor gauge length L0 . 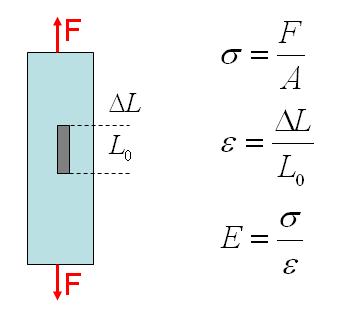 The elastic properties of a material volume are called isotropic if the Engineering constants are the same in all possible directions of the considered material volume. Examples of isotropic material are commonly known materials like glass, cement, metals, plastics, and short fiber reinforced plastics with random distribution and so on… For a two dimensional sheet, the relations between in-plane stresses and strains are given by the flexibility matrix. In the case of 2D plane stress this relation can be written for isotropic material as: 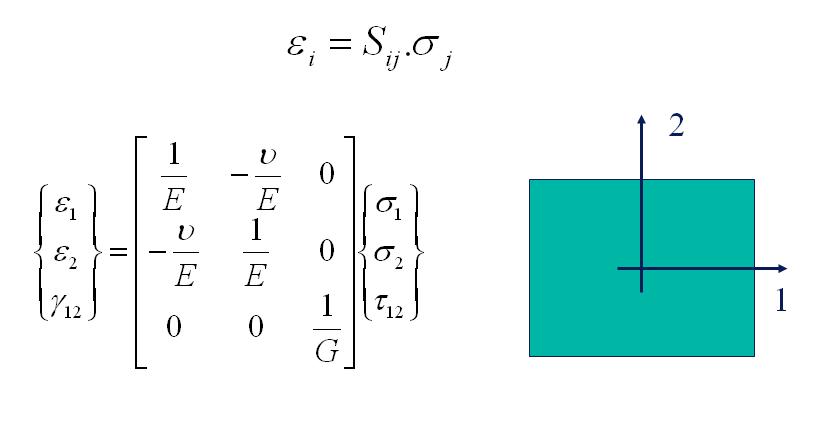 So there are only two independent Engineering constants to be determined in order to characterize the elastic properties of an isotropic material.

A material is called orthotropic when the elastic properties are symmetric with respect to a rectangular Cartesian system of axes. In the Resonalyser procedure the material symmetry axes are supposed to be parallel (or perpendicular) with the sheet boundaries. In case of 2D plane stress, the stress-strain relations for orthotropic material become: 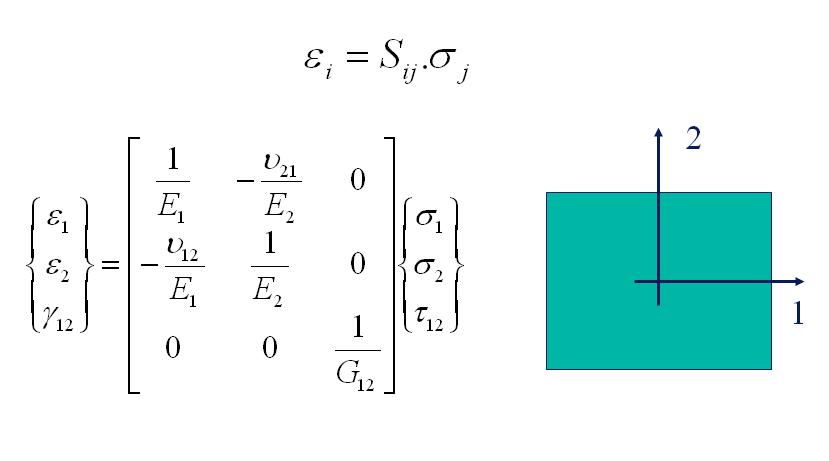 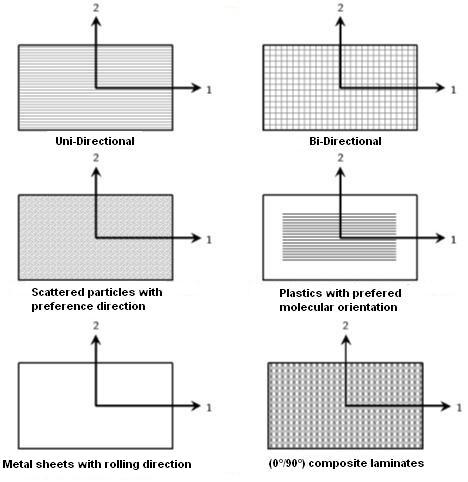 In case the natural frequency f is measured for a bending (“flexural”) modal shape on a thin beam with a rectangular cross section (b x t), a Length L and a Mass M, the formula for Young’s Modulus E below is used. 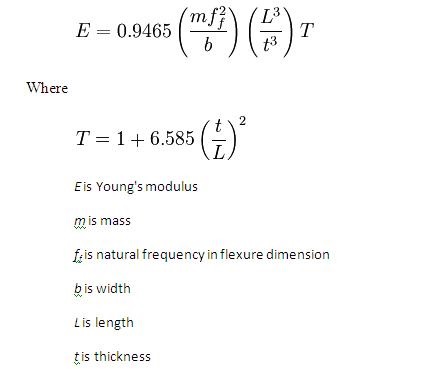 The “resonalyser procedure” is an extension of the IET allowing a fast and accurate simultaneous identification of the 4 Engineering constants E1, E2, G12 and v12 for orthotropic materials and the 2 Engineering constants E and G in the case of isotropic materials. For the identification of the four orthotropic material constants, the first three natural frequencies of a rectangular test plate with constant thickness and the first natural frequency of two test beams with rectangular cross section must be measured. One test beam is cut along the longitudinal direction, the other one cut along the transversal direction (see Figure below). 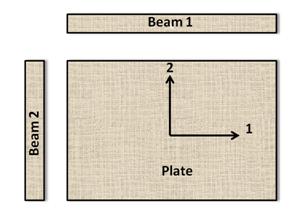 The Young’s modulus of the test beams can be found using the IET formula for test beams with a rectangular cross section.

The ratio Width/Length of the test plate must be cut according to the following formula:

This ratio yields a so-called “Poisson plate”. The first 3 natural frequencies of a Poisson plate are sensitive for variations of all the orthotropic Engineering constants.

The Resonalyser procedure for material identification consists of the following steps:

Vibration of beams and rectangular plates

The vibration of beams and rectangular plates can be characterized by their modal shapes and the associated natural frequencies. The figure below shows the fundamental bending modal shape of a beam with uniform thickness. A modal shape is a standing wave vibrating at a natural frequency. In one vibration period, the beam undergoes a deformation starting from a non deformed shape to a maximum deformation in one transverse direction, next a maximal deformation in the opposite transverse direction and finally the beam returns to the non deformed shape. The natural frequency indicates how many such vibration periods the beam performs in one second. The number of cycles is expressed in Hertz. One Hertz equals one period in one second. The value of the natural frequency which is associated to the modal shape vibration pattern is high for stiff beams with a relative small mass and low for flexible beams with a relative high mass.

The figure below shows the modal shapes associated with the first 5 natural frequencies of a rectangular plate. 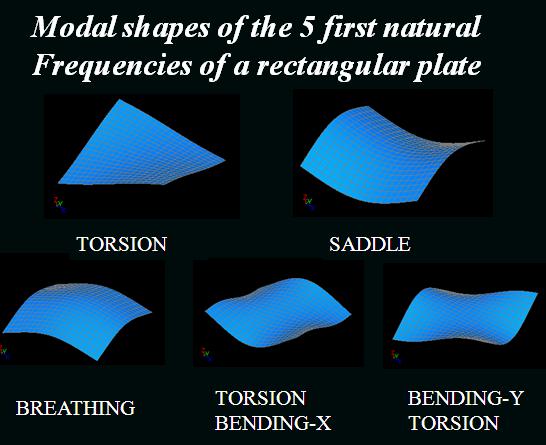 Each node of an element can be associated with an interpolation function, usually called “shape functions”. A shape function has the property to have the value 1 in the node where it is defined and zero in all other nodes of the element. The figure below shows the shape functions of an 8 node element. 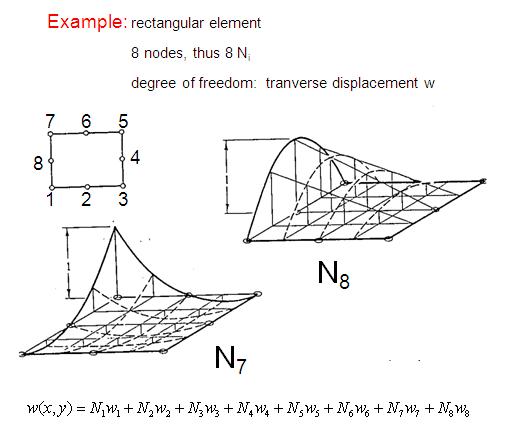 The degree of freedom in an arbitrary point of the sub domain of a finite element can be expressed as a summation of the value of the degree of freedom in the nodes multiplied with their shape function. The relation between bending and torsion moments acting on a plate and the plate curvatures they are causing is established by the plate rigidity matrix. 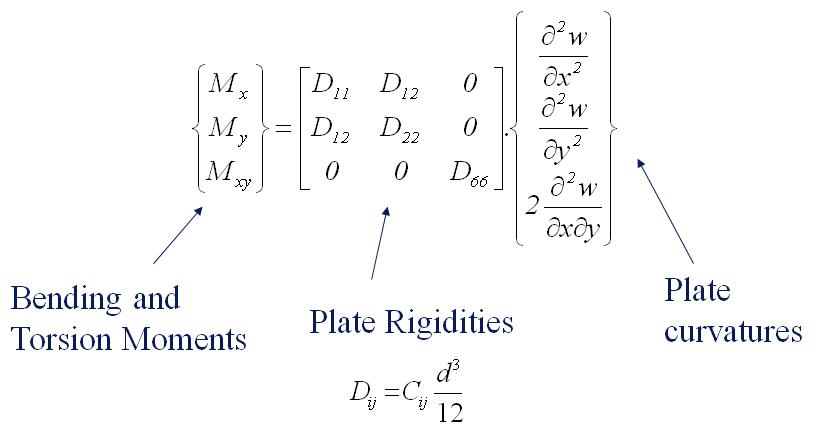 Using the geometry, mass information and the shape functions, the finite element method can evaluate also a Mass matrix [M]e for each element. All these element matrices can next be assembled to form the total structure finite element matrices [K] and [M] of a plate (beam). The natural frequencies ƒi of the plate (beam) and the associated modal shapes φ can be computed from these matrices by the solution of an eigenvalue problem (see figure below). 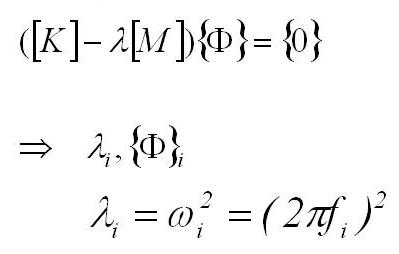 Tuning the Engineering constants in the finite element model is performed by a mixed numerical experimental method and is described in the next paragraph. 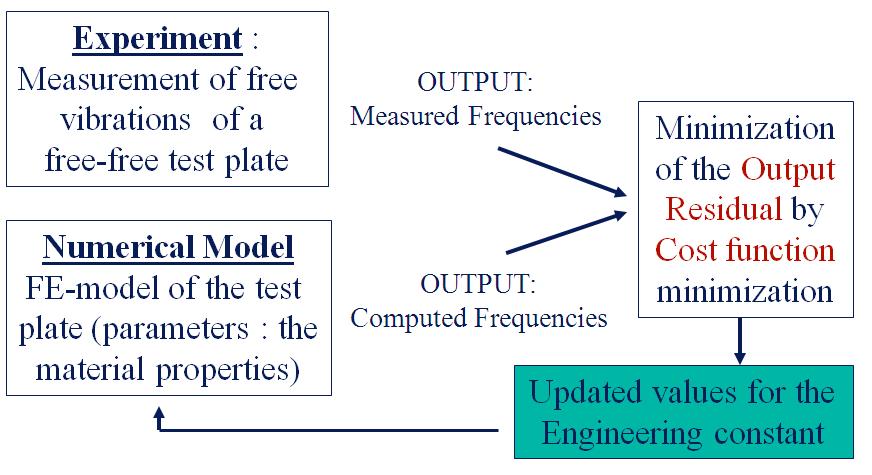 Identification of the damping behavior of the material

The real part can be identified using the resonance frequencies in the Resonalyser procedure (see previous paragraph). The imaginary part can be identified by measuring the modal damping ratios (ξBeam1 and ξBeam2) associated with fundamental bending modal shapes of the two beams and the modal damping ratios (ξTorsion ξSaddle and ξBreathing) associated with the 3 modal shapes of the Poisson plate.

The bending modal shape of the beams is directly proportional with the tangents delta of the Young’s moduli E1 and E2.

For the plate, each of the modal shapes receives a contribution of the 4 plate rigidities. The relation is given by the G matrix, which contains components related to the modal strain energy of the modal shapes. The G matrix can be computed by the finite element program in the Resonalyser software using the identified real part of the engineering constants.

More theoretical details about the resonalyser method can be found in the list of references.